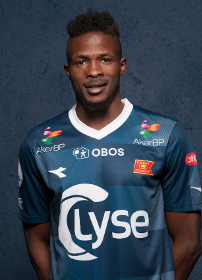 Former Flying Eagles striker Usman Saleh-Hassan said he has been very happy with his stay in Norway as he is being treated like a king at his club Viking FK.

"I have been very happy at my club because they treat me well here" he told allnigeriasoccer.com in Jos, Plateau State, North-Central Nigeria earlier today.

"The coaches have given me enough room to play and that has really improved my game and I can also give thanks to God Almighty." he added.

The former Mighty Jets and Wikki Tourists of Bauchi forward however stressed that football is business and he is looking to sign an improved contract at the club next season, adding that the decision will however be subject to the advice of his agents.