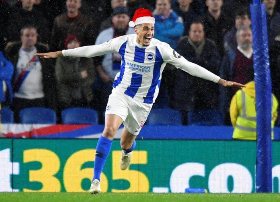 Some Super Eagles stars were in action for their clubs on Christmas and Boxing Days with most leagues now on a recess.

Izuchukwu Okosi looks back at some of the takeaways from their performances.

1. Balogun's Error Leading To Goal Costly
Super Eagles defender Leon Balogun was at fault for Arsenal's goal on Wednesday at the Amex Stadium with his poor clearance.

Alexandre Lacazette pounced on that laxity and laid the ball to Pierre-Emerick Aubameyang to score his 13th Premier League goal of the season.

Balogun's error leading to goal mirrored the one against Chelsea for Eden Hazard.


Ndidi's class showings for Leicester are likely to attract interests from big clubs.
According to statistics website, Whoscored.com, Ndidi had five tackles, three interceptions, one clearance and two aerials won.

Former Enugu Rangers striker Chikeluba Ofoedu scored his fourth goal in 12 league matches for Israeli side Macabbi Tel Aviv on Christmas day in a 3-0 win over Hapoel Beer Sheva with fellow Nigerian John Ogu in action for the visitors.

Ofoedu may be playing in a league deemed to be in the backwater of European football but his consistency is something to watch out.

If Ofoedu's goal scoring form continues he deserves to have a look in in the Super Eagles.