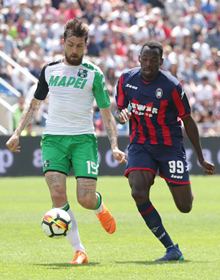 Round up of the Nigerian players that got on the scoresheet for their European clubs on Sunday, December 30.
In the Italian Serie B, Crotone surrendered a two-goal lead to lose 3-2 to Ascoli at Stadio Cino e Lillo Del Duca.
Nigeria international Simeon Tochukwu Nwankwo is back in favour at the Red and Blues, starting for the second straight game, and it was he that opened the scoring as early as the ninth minute.
Having lost six of their last seven games in the division, Crotone are second-bottom with 13 points.
In the Italian third-tier, former Inter Milan whizkid Roberto Ogunseye now has five goals in his last nine games after finding the net for Olbia as they were held to a 1-1 draw by visitors Albissola.
The 23-year-old Italian-born striker struck in the 21st minute but his goal was cancelled out eight minutes from time.
Last but not least, Farense handed a 5-0 thrashing to UD Oliveirense in the Portuguese Segunda Liga, with all the goals coming in the second half.
With 58 minutes on the clock, they were 2-0 up thanks to their number nine, Christian Irobiso, his fifth goal in his last nine starts.
Ifeanyi Emmanuel