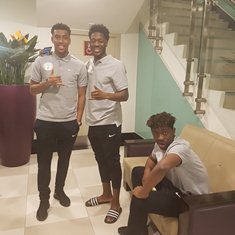 Queen Park Rangers winger, Eberechi Eze has lauded his side's resilience following their 2-2 draw with Aston Villa in yesterday's Championship clash, revealing he and his mates had earlier envisaged it was always going to be a difficult affair for them.

Prior to the clash at the Villa Park yesterday, the 'Rs' have won in just one of their last five trips to the stadium and their struggles there were laid bare when they fell behind to a Tammy Abraham's opener in the 21st minute.

"We knew it was going to be tough but i think we did ourselves proud with the way that we played", he told qpr.co.uk
"It's a tough place to come to get anything.

"We knew it was going to be a battle but I think we did ourselves proud with the way we played and, in the end, a point was probably fair."

"We had to dig deep at the end but it shows the resilience we've got now."

The former Arsenal youth-teamer who was among the goal scorers in the encounter got on the end of teammate Wszolek's right wing cross in the 57th minute to finish off a swift move with a sumptuous effort for his side's second goal, thus ending his long wait for a goal since September 2018.

"It's been a while!" he joked. "I'm just happy to do what I can to help the team and luckily today it came off.


Contracted to the Loftus Road outfit till June 2021, Eze has scored four goals and laid on another four for the club in the division this season.
Emmanuel Chinaza