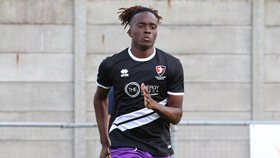 National League side Dover Athletic have informed through their official website that Joshua Debayo's loan spell has been extended until the end of the 2018-2019 season.
The left-back initially joined The Whites from Cheltenham Town on loan until January and that agreement has been extended as he has made an impact since his arrival.
Debayo started Cheltenham Town's first four league games of the season and lost his spot in the team after Chris Hussey returned to full fitness.
The 22-year-old spent his formative years as a footballer with the youth teams of Fulham, Chelsea and Southampton before joining Leicester City in 2016 following a successful trial.
The Nigerian has made nine appearances for Dover Athletic since joining the club in October 2018.
Dover Athletic pay the wages of center forward Inih Effiong who has tallied eight goals this term.
Igho Kingsley
Photo Credit : doverathletic.com