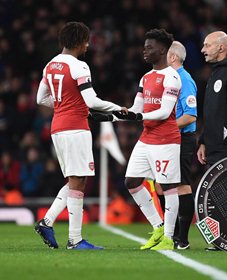 Arsenal coach Unai Emery has hinted that teenage Nigerian winger Bukayo Saka could make his Emirates FA Cup debut when they face Blackpool at Bloomfield Road on Saturday evening.
The Hale End Academy product has already debuted for the Gunners in the Premier League and Europa League and will make it three competitions if he plays against the Seasiders.
Should Saka feature against Blackpool, he will be aged 17 years and 4 months which makes him one of the youngest players of Nigerian descent to debut in the FA Cup.
''I am using different players because of injuries, but it is important for us to give chances to the young players," said Emery to arsenal.com.

"The young players, like Saka, he has debuted in his last match and he was playing because at the moment we haven’t a lot of players who have the possibility to play wide right or wide left.

"Saka is in the academy, growing up with good performances. It is the beginning, I hope, of a long career here in Arsenal.''
Former Southend United midfielder Femi Orenuga is the youngest player of Nigerian descent to appear in the FA Cup aged 15 years, 8 months and 11 days.
He came on in the third minute of stoppage time vs Luton Town on November 29, 2008 in a second round clash.
Ifeanyi Emmanuel
Photo Credit : arsenal.com