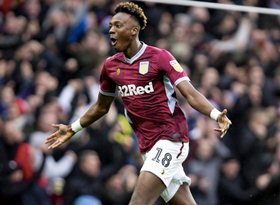 Wolverhampton Wanderers are in advanced talks with Chelsea for the signing of England U21 striker of Nigerian parentage Tammy Abraham.
The Express and Star says Abraham is edging nearer to joining Wolves on a temporary basis for the rest of the season – with no option to buy him permanently.
Fifa states that players may be registered with a maximum of three clubs during one season and during this period, the player is only eligible to play official matches for two clubs.
However, Wolves are confident of getting the deal over the line as they would argue that Abraham's appearance for Chelsea U23s and the first team in the Community Shield should not count as official games.
Abraham was left out of Aston Villa's FA Cup clash vs Swansea City on Saturday despite being in tiptop condition, fueling speculation of an imminent departure from Villa Park though manager Dean Smith claims they never got permission off Chelsea for him to play.
The 21-year-old earns £55,000 weekly wage at Chelsea and Wolves are expected to pay a large proportion of the wages if the deal goes through.
Ifeanyi Emmanuel
Photo Credit : avfc.co.uk