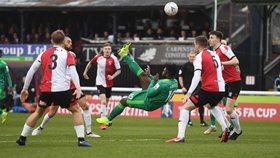 Catch up on the players of Nigerian descent that were in action in the third round of the Emirates FA Cup on Sunday, January 6th.
At the Etihad Stadium, Super Eagles defender, Semi Ajayi could not help Rotherham prevent a 7-0 trouncing at the hands of Manchester City.

Ajayi's miserable afternoon was further compounded when he turned in a dangerous cross from Walker into his own net at the stroke of halftime for 3-0.

At the Laithwaithe Community Stadium, Isaac Success started upfront for Watford who beat National League side Woking 2-0 to book their place in the next round of the competition.

The striker who was cautioned in the 14th minute came close to scoring twice in the first half before he was replaced by Troy Deeney 19 minutes from time.

Teammate Stefano Okaka who has been subject of transfer speculations was omitted from the match day squad.

Elsewhere, the trio of Eberechi Eze, Bright Osayi-Samuel and Aramide Oteh were handed starting berths by Queen Park Rangers manager, Steve McClaren in their 2-1 win versus Leeds United at the Loftus Road.

After 23 minutes, Jake Bidwell was tripped in the area by Leeds defender, Davis and Oteh was handed the responsibility of taking the spot kick, the 20-year-old stepping up to send goalkeeper, Bailey Peacock-Farell the wrong way.

While Osayi-Samuel and Eze lasted till the 86th and 90 minutes of the game, Oteh made way after 83 minutes.

Manchester City loanee, Lukas Nmecha was in the starting XI at the Deepdale for Preston North End who succumbed 3-1 to Doncaster Rovers.

Nmecha was afforded 74 minutes of play before he came off for Sean Maguire.