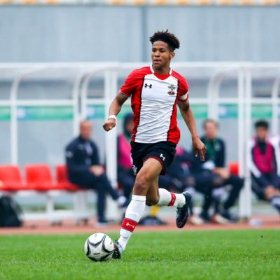 Promising Nigerian defender Oludare Olufunwa made his maiden appearance for Southampton U23 team as they beat Stoke City in a Premier League 2 contest at  Staplewood Training Ground on Friday night.
And it was a full debut for the 17-year-old as he was named in the Saints starting line-up along with attack-minded duo Nathan Tella and Jonathan Afolabi.
After a cagey first half which ended goalless, the three Nigerian teenagers were involved in the build up to the opening goal scored by the home team.
Olufunwa burst forward down the right flank and his pass found Afolabi, who held his marker, allowing Nathan Tella to pick his spot with a right-footed finish from inside the box.
He joined Southampton in 2010 after he was spotted playing for a local club and was originally a central defender before he was converted to a right-back.
Olufunwa has cited Manchester City captain Vincent Kompany as his role model.
Ifeanyi Emmanuel
Photo Credit : southamptonfc.com