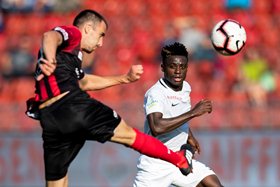 Super Eagles head coach Gernot Rohr has revealed that he is keen to invite new players for the March 26 international friendly against Egypt at the Stephen Keshi Stadium, Asaba.

Izuchukwu Okosi in this piece presents five players who should be considered for that game and then become permanent features in the national team.

Nigeria football faithful who follow the Nigeria Professional Football League will never forget Stephen Odey for his exploits with MFM FC where he scored 18 league goals in 2017 and were on the cusp of matching or breaking the record held by new Akwa United star, Mfon Udoh who has a 23 goals in a single season.

The striker however signed for FC Zurich after the purported move to a Danish side broke down.

Rohr needs to consider having this quality striker be part of the friendly against Egypt where hopefully Odey will do enough to convince all and sundry that he will be good addition to the Super Eagles.

If Gernot Rohr or his scouts indeed watched Nigerian players over the festive period then the performance of Everton's Ademola Lookman in the FA Cup win over Lincoln City surely deserves to get a consideration in terms of convincing him to elect Nigeria where he has his roots and not England.

There is talk of having Victor Moses back in the fold which is not entirely bad but the younger Lookman has many years ahead of him and what the future holds for this lad is frightening.

It is written in the stars for him to blossom into a great player and it will be a shame if the boy is allowed to go the way of Dele Alli and Ross Barkley.

Former Enugu Rangers striker Chisom Egbuchulam is one of the most in form Nigerian players abroad.

Egbuchulam may not be playing for a top side in one of the top five leagues in Europe but the ex- Falkenbergs FF of Sweden front man could just turn out to be one of those late bloomers who go  ahead and do amazing things at bigger clubs.

Didier Drogba did not start his European club career at Chelsea - how many folks knew the Ivorian whilst he played at Le Mans or Guingamp in the French league before moving to Olympique Marseille?

That says it all!

Young Nigerian winger Bukayo Saka is beginning to turn heads for the promise he has shown playing  few senior games for Arsenal.

Saka is a youth international for England but it will be most exhilarating to see him pull on the green and white jersey of Nigeria.

And really he should not think twice before accepting to play for his fatherland and not for England where he will either wait LONG to actualise his dream of international football or be used sparingly/few times and then forgotten!

If Gernot Rohr want a 'new Mutiu Adepoju' in the Super Eagles, he should then look no further than having former Enugu Rangers man Obinna Nwobodo in his team.

Nwobodo's vision and eye for the spectacular goals from midfield is magnificent and he could be a gem in a Super Eagles midfield that desperately need all the creativity they can muster.