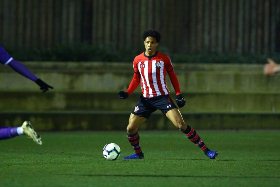 When put on the spot, Southampton wonderkid Oludare Olufunwa has admitted that he would be open to playing for the Nigerian National Teams if he's invited by the Nigeria Football Federation.
The 17-year-old Southampton-born defender has been tipped for a first-team breakthrough in the not too distant future, having made his debut for the The Saints U23 squad against Stoke City four days ago.
''My father is Nigerian, my mum is English and I was born in Southampton. Yes of course I will honour the call up to the Nigeria squad if the opportunity was to come,'' Olufunwa told allnigeriasoccer.com.
''I’ve always wanted to play for the Super Eagles but also playing for England is an option for me as I’ve grown up here and wouldn’t rule it out.''
Having left the door wide open for the Nigerian Federation to make a move for his services, Olufunwa, who was recently converted from a central defender to a fullback, revealed that he looks up to Arsenal's Alex Iwobi and Chelsea-owned Ola Aina.
Asked who he models his defensive game after, the talented teenager answered : ''At the moment I’m playing right wing back which is an even newer position for me but when playing centre back I aim to mirror Van Dijk but in general I like the style of Yaya Toure.
''In terms of a Nigerian player at the moment I like Iwobi’s energy and also Aina who I think is a very good right back.''
Olufunwa joined Southampton in 2010 following a successful trial after he was spotted playing for a local club.
Ifeanyi Emmanuel