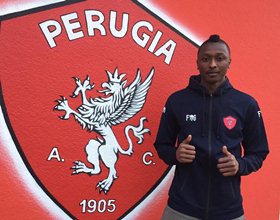 Italian Serie A club AS Roma and Perugia have struck a deal for ex-Nigeria U23 international Umar Sadiq, informs the Grifoni on their official webpage.
The agreement between both teams will keep the striker in Umbria for the remainder of the 2018-2019 campaign.
The 21-year-old Sadiq spent the first half of the season at Scottish Premiership giants Rangers where he made only four appearances before his loan spell was cut short due to his lack of first-team opportunities.
Born in Kaduna, he began his career in Italy during the 2013-2014 season in Serie D with the Lavagnese before joining Spezia the following year.
Since 2015, the attacker has been on the books of Roma, first joining on loan before securing a permanent transfer.
The Football College Abuja product previously spent time on loan at Bologna, Torino, NAC Breda and Rangers as he has not been able to break into the first team of the Giallorossi.
Ifeanyi Emmanuel
Photo Credit : acperugiacalcio.com