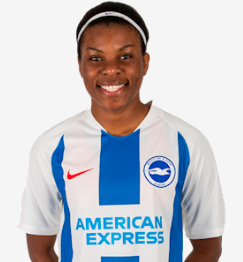 Brighton & Hove striker Ini Umotong, 24, has received a call-up to the Nigerian Women's National Team for a four nations tournament.
As part of their preparations for the Fifa Women's World Cup in France this summer, the Super Falcons will take part in a four nations tournament scheduled to take place in Meizhou, China between January 17 and 21, 2019.
The other participating teams are two World Cup bound teams in the shape of hosts China and South Korea while Romania are the fourth nation.
Umotong is returning to the Nigeria fold after her shock omission from the 2018 Africa Women Cup of Nations roster.
In 2015, she was part of the Super Falcons squad to the 2015 Women's World Cup in Canada but the number 11 was an unused substitute in the three group games.
This season, Umotong has scored two goals in the Women's Super League, most recently in a 2-0 win vs Liverpool, from 12 appearances.
Ifeanyi Emmanuel
Photo Credit : brightonandhovealbion.com