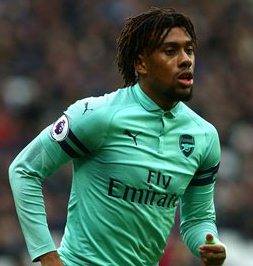 Super Eagles star Alex Iwobi produced an inspired performance despite Arsenal's 1-0 defeat suffered against West Ham United on Saturday which has put the Gunners' Champions League qualification in serious jeopardy with their fifth defeat of the season.

These are how some of the English media that followed the match rated the twinkle toed winger.

In its rating, Mirrror.co.uk wrote:

Football. London which report news on all London based clubs on their part questioned if Iwobi, in the absence of Mesut Ozil, will ever be appreciated.

"Alex Iwobi. Ozil's absence is doing Iwobi no favours: his every loose pass or wasted chance coming what the question 'what would Mesut do there?'

"But judged on his own terms Iwobi is an impressive contributor, making smart passes when under pressure and driving into space whenever it opens up for him.

"One of the few Arsenal players whose display merited a result, he will have been frustrated that his well-struck low drive flashed just wide of the far post on 66 minutes. 7."

Iwobi was unarguably the star player for Arsenal in an otherwise disappointing game, with 90min.com handing the Super Eagles star a decent 7 out of 10.

"Though Arsenal were unable to make the most of their attacking moves, Alex Iwobi proved to be a lively performer and the Gunners' most effective attacking outlet once more on Saturday.

"The Nigerian has shown vast improvements this season and was full of energy and purpose going forward again for the visitors at the London Stadium.

"Iwobi was Arsenal's attacking spark, albeit with a lack of final touch.''

Arsenal Station which is a blog dedicated to the north London club believe that despite Iwobi's industry he is still not the playmaker Arsenal need to supply assists to the duo of Pierre-Emerick Aubameyang and Alexandre Lacazette.

"Iwobi 6/10.  "Not the creator we need to feed Auba/Laca but still worked hard and wasn't afraid to get on the ball.

Winger Bukayo Saka who is eligible to play for Nigeria, his father's country of origin, despite playing in the youth level for England was not listed for the match.

Arsenal's next league game is a blockbuster clash with London and top 4 rivals Chelsea next week Saturday.