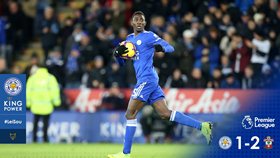 A round-up of Nigerian players that were in action for their respective clubs in the English Premier League on Saturday, January 12.
Nigerian players with dual nationalities and have played competitively for the senior national teams of other countries have been omitted.
In the early kickoff at the London Stadium, Declan Rice's first goal for West Ham in the 48th minute of the contest gave the Hammers a 1-0 win over Arsenal.
Alex Iwobi was one of the few shining lights for the Gunners in their dismal showing and played the full game. Teammate Bukayo Saka was not in the 18 for this one.
At the American Express Community Stadium, Mohamed Salah dusted himself down after he was felled in the area to convert a spot kick four minutes after the restart as league leaders Liverpool beat Brighton & Hove 1-0.
Super Eagles defender Leon Balogun watched proceedings from the bench for the third straight game.
Elsewhere, Watford came from behind to beat Crystal Palace 2-1 at Selhurst Park (London) with Craig Cathcart cancelling out his own goal before Tom Cleverley grabbed the match winning goal with 16 minutes left.
The Hornets number ten Isaac Success did not taste action for the first time in the Premier League this term.
At the King Power Stadium, it was a disappointing afternoon for Leicester City after they lost 2-1 to Southampton.
It was 2-0 to the Saints at the break thanks to goals from James Ward Prowse and Shane Long but Wilfred Ndidi pulled one back for the Foxes on 58 minutes.
The Nigeria midfielder played the full game while Kelechi Iheanacho was a non-playing substitute.
It was a goalless stalemate at the Cardiff City Stadium between Cardiff City and Huddersfield Town. Denmark U21 international Philip Billing played the entirety of the game for the Terriers.
In the late kickoff at Stamford Bridge, Victor Moses is not in The Blues 18 against Newcastle United.
Ifeanyi Emmanuel
Photo Credit : lcfc.com