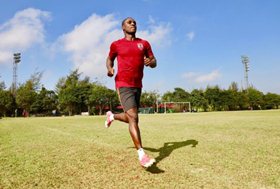 Barcelona want to bolster their squad with the signing of a striker in the January transfer window following the departure of Munir El Haddadi to Sevilla.
According to Spanish magazine Sport, Barcelona want a player who gets into space well and is a good finisher, and Alvaro Morata and Odion Ighalo are among the options being considered to help lift the weight off Luis Suarez shoulders.
Ighalo spent most of his professional career in Spain and his qualities are known to the La Liga champions .
The 2019 Africa Cup of Nations qualifiers leading marksman has faced the Azulgranas three times in the Spanish topflight, scoring in a 2-1 loss back in the 2012-13 season.
Ighalo's club Changchun Yatai have been demoted from the Chinese Super League and Barcelona are hoping to loan the Nigeria international for the remainder of the season.
Three unnamed Premier League clubs plus Fenerbahce and Galatasaray are understood to be interested in the former Udinese and Watford man.
Ifeanyi Emmanuel