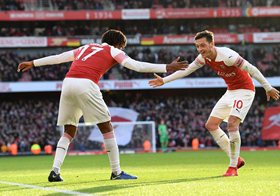 Ex-England striker John Fashanu has claimed that Nigeria manager Gernot Rohr should build his Super Eagles team around Arsenal’s Alex Iwobi ahead of the African Cup of Nations this year.

He’s a player who has divided Arsenal fans in the last few years but Alex Iwobi has certainly improved of late.

The 22-year-old has now made over 120 appearances for the Gunners since breaking through to the first team in 2015.

Born in Lagos, Nigeria, Iwobi moved to England at the age of four.

The nephew of the popular Jay-Jay Okocha, Iwobi was always a keen footballer and joined the Arsenal youth team while still in primary school.

The attacker worked through the ranks before breaking into the first-team at the age of 19.

He started well, impressing many with a string of appearances which earned him an established place in the squad.

His form declined in his second and third seasons but he continued to feature regularly for the Gunners under manager Arsene Wenger before the legendary Frenchman’s departure in May 2018.

It was unclear just how much Alex Iwobi would feature for the Gunners under new head coach Unai Emery but it quickly became clear that the Spaniard viewed him as an important player.


Iwobi has played in all but five of Arsenal’s matches in all competitions this season and has put in some impressive performances.
Even in the recent 5-1 defeat to Liverpool, Iwobi was Arsenal’s best player on the day, something which a former England international noticed.

“He (Iwobi) has been exceptionally brilliant in his last couple of games for Arsenal and I was really impressed by his play in the game against Liverpool,” said former Wimbledon and England striker, John Fashanu.

“No doubt, he is in good form and I believe he would maintain the form in the latter part of the season and more importantly to the Nations Cup coming up in the middle of the year.”
The African Cup of Nations is indeed coming up this year. Iwobi has been a part of the Nigerian National Team since 2015 and is one of the leading figures in this young Super Eagles side.

Nigeria have already qualified for the competition which will kick off in Egypt on 15 June.

The tournament will be Iwobi’s first African Cup of Nations but Fashanu thinks that Nigeria should look to build their attack around the 22-year-old.

“There is no doubt he has the talent and experience to control the game from the midfield. I hope the manager is seeing things the way I’m seeing it,” Fashanu went on.

“He is in form and he should be the one that would initiate most of our moves. The players should get him involved and by this, I mean he should get the ball regularly.

“He is a big threat to the opponents when he is with the ball as he has the intelligence to unlock any defence with his passes.”

Fashanu’s view is echoed by one of Iwobi’s international teammates. Kenneth Omeruo is currently on loan at the Spanish side CD Leganes from Premier League giants Chelsea and believes that Iwobi is a key player for the Super Eagles.

“Iwobi has improved a lot and he brings that into the national team as well,” Omeruo told Goal.com.

“He has good footwork, he moves well and he enjoys what he does. For him, it is fun to play football. He is a really good player but the exciting thing is there’s more to come.”
Fans of Nigeria will be hoping that is the case and they aren’t alone. Arsenal supporters are also backing Alex Iwobi to become a key player in their side’s attack in the coming months.

There are definite signs of progress under new head coach Unai Emery but the Gunners still face an uphill challenge.


They are the 11/2 outsiders to reach the Premier League top four this season on Betway as of 14 January.
It’s a big ask for Arsenal but Alex Iwobi will be hoping he can help his side reach their goals.

The forward has shown flashes of excellence at times this season but will be hoping for a more consistent run of form.

If he can show his skills for his club in the next few months then there is absolutely no reason why he shouldn’t become the centre of Nigeria’s attack for the upcoming Nations Cup.