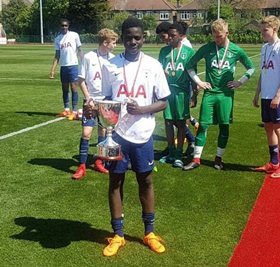 Omari Forson, signing the 15-year-old from Tottenham Hotspur.
A Manchester United youth-team guru has tweeted that United have signed highly rated England U15 midfielder Omari Forson who was previously at Spurs.
Forson is regarded as one of the hottest young prospects in England and was heavily courted by Manchester City and Everton before the Red Devils pulled off a transfer coup.
He began his career with the West Ham Academy before heading to North London club Tottenham.
Forson will link up with promising Nigerian attacking midfielder Shola Shoretire at Manchester United.
Igho Kingsley
Photo Credit : twitter.com/MUnitedFR