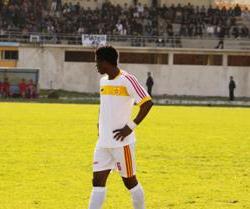 Manchester City manager, Pep Guardiola could have been notified by his scouting department about the qualities of Partizani Tirana's Nigerian defender, Sodiq Atanda if emerging reports are anything to go by.

Croatian media outlet, 24sata.hr has informed that the Citizens had dispatched one of their talent hunters to watch the club's friendly encounter with Croatian side, Dinamo Zagreb yesterday in Turkey.

The former Nigeria U-23 star who has been described as a strong, ball-playing defender partnered with Egzon Belica in central defence for 'The Red Bulls' in the game.

Sodiq has featured in 16 of a possible 18 league games for his table-topping side in the Albanian Super Liga this season and is a player the club hold in high esteem.

Prior to moving abroad in 2013 where he has also represented KF Apolonia, the 25-year-old played for hometown club, 36 Lion FC which also produced Super Eagles attacker, Imoh Ezekiel.


His current contract with the club runs out in June 2019.
Emmanuel Chinaza