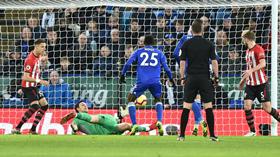 Wilfred Ndidi has been named the top Premier League player in one key performance indicator in the 2018-2019 season.
According to respected football statistics website, Whoscored, the Foxes number 25 has won possession in the midfield third more times (100) than any other player in the Premier League this season.
Of the 22 matches contested by Leicester City in the English top flight this term, the Nigeria international has gone the distance in 21 games while he came off the bench in the first half against Brighton & Hove.
Ndidi averages 3.1 tackles per game, 1.9 interceptions, 2.3 clearances and 0.2 blocks per game.
Shooting from distance is part of the central midfielder's repertoire of skills and he has averaged 1.9 shots per game.
He opened his account for the season against West Ham in October and netted what proved to be only a consolation as Leicester City were beaten 2-1 by Southampton this past weekend.
Ifeanyi Emmanuel
Photo Credit : lcfc.com