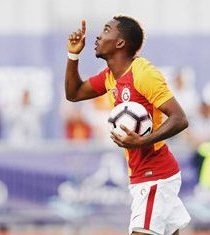 Nigeria international Henry Onyekuru may get an Ivorian strike partner at Turkish Super Lig club Galatasaray this month, allnigeriasoccer.com understands.
Galatasaray are in the market for an attack-minded player following the sale of Cape Verde star Garry Rodrigues to Al-Ittihad last week and have opened talks with Swansea City over the signing of Wilfried Bony.
Although Onyekuru is a lot more effective as a winger, the Everton loanee was deployed in a central attacking role in four of Galatasaray's last six matches in the first half of the season and this has benefited the club, with the Super Eagles star scoring four goals.
Swansea City want to get Bony off the wage bill and are negotiating the permanent transfer of the ex-Manchester City star from the club to Galatasaray.
Christopher Farnell of IPS Law lLP has been exclusively mandated by the Chairman of Swansea City to liaise with Andre Duncalf and Kerem Solmaz to conduct and negotiate the transfer of Bony.
Having had difficulty in obtaining a work permit for the second straight season, Onyekuru went on loan to Galatasaray in July 2018.
Ifeanyi Emmanuel
Photo Credit : galatasaray.org