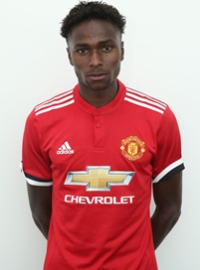 American-born Nigerian defender Matthew Olosunde has recovered from a long-term injury and was included in Manchester United's match day squad for the first time this season as the U23 team were held to a goalless draw by PSV in a Premier League International Cup clash at Leigh Sports Village Stadium on Thursday evening.
The right back has not featured for The Red Devils since February 27, 2018 when he lasted 45 minutes on the pitch against Villarreal in the Premier League International Cup.
Although Olosunde was battling injury concerns for most part of last season, he still managed to earn his only senior cap for the United States in a friendly against Bolivia last May.
On his return to the match day squad, he was among the four substitutes not introduced off the bench by manager Ricky Sbragia.
The fullback will be hopeful of making his first appearance for the 2018-2019 campaign in United U23s upcoming fixtures against PSG and Southampton.
The 20-year-old Olosunde has yet to make his professional debut but traveled with the first team for Premier League games against Arsenal and Tottenham Hotspur in 2017.
Ifeanyi Emmanuel
Photo Credit : manutd.com