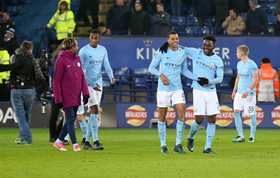 Nigerian midfielder Tom Dele-Bashiru is preparing to bid farewell to Premier League champions Manchester City, according to reports.
Sky Sport Italia says Italian Serie A side Atalanta have reached an agreement for the signing of the former England U16 international.
Dele-Bashiru has entered the final six months of his contract with Manchester City and has rejected their offer of a new contract.
The 19-year-old is one of the most exciting prospects at Manchester City Academy and is highly thought of by Pep Guardiola, who named the youngster in the squad for the tour of the United States in pre-season.
The Manchester-born talent made his professional debut for the Citizens against Leicester City in December 2017.
Dele-Bashiru has stated that he wants to play for Nigeria's senior team or England within the next three years.
Ifeanyi Emmanuel
Photo Credit : mancity.com