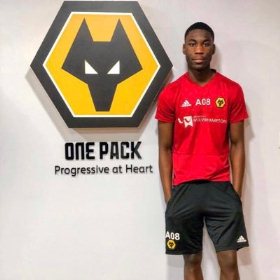 Wolverhampton Wanderers have completed the signing of promising Nigerian teenager Michael Agboola, informs the official website of the Premier League side.
The 17-year-old midfielder was offered a professional contract after he impressed whilst on trial at the club.
This is a big step up in Michael Agboola's career as he is joining Wolverhampton Wanderers from a fifth-tier club in England, Dagenham & Redbridge.
He spent the last seven years of his career at The Daggers and was a second-year scholar at the club prior to his move to the Molineux.
In April 2018, Agboola was nominated for the LFE Goal of the Month for his outrageous effort straight from kick-off for The Daggers Academy.
His elder brother, Manny Agboola is a goalkeeper at Oxford United and the 20-year-old has pledged his international future to Nigeria.
On his curriculum vitae, Michael Agboola has also played for the youth teams of Southampton and Charlton Athletic.
Ifeanyi Emmanuel