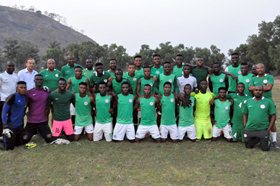 The Flying Eagles showed they were some class over their Burundian opponents with a 2-0 win to open their 2019 Afcon tournament in Niamey on Saturday.

But how did each of them perform?

Olawale Oremade: Had little to do especially in the second period as Burundi offered very little in terms of attacking threats. 7/10

Zaruma Mike: Left little room for the rivals to work on amidst little forays. A good showing. 7/10

Ikouwem Utin: Started slowly as he left pockets of space in his channel for the opponents to attack but grew into the game in the second period. Stamped his presence with his bombing runs to join attacks.7/10

Ozornwafor James: Took no prisoners in the center of defence and was hardly found wanting. 7/10

Ogbu Igor: Didn't put a foot wrong in limiting the chances created by the Burundian attackers. A solid showing from the Rosenborg FC star. 7/10

Jamil Mohammed: Kept passing simple and held up play for his team in midfield. 6.5/10

Abubakar Ibrahim: Showed a good understanding with Aremu in the middle of the park and was always willing to run at the opponents. Put in a pin-point cross for Yahaya to open the scoring. 7.5/10

Aremu Afeez: Kept play ticking as he tried spraying audacious passes to pick out the attackers. Came off for Aniekeme Okon in the 73rd minute. 7/10

Alhassan Adamu: Was a thorn in the flesh for the opponents who had little clue how to shackle him. Unfortunately sent a header straight at the goalkeeper in the goalkeeper in the opening stages and showed good link-up play and understanding with Yahaya. Picked up a yellow for his troubles. 8/10

Aliyu Ibrahim: Had a quiet game on the right side of attack. Went on a few charges which did not come off though held-up play was not bad. Came off in the second period. 6/10

Yahaya Nazifi: The Sonderjyske FC starlet was arguably the best Flying Eagles player. Came close to breaking the deadlock with a potential 'Goal of the Tournament' contender with a nicely executed bicycle kick and equally tried to slit open the Burundian defence with a backheel pass which was blocked. Opened scoring with a textbook header before laying on his team's second. A classy showing.8.5/10

Effiom Michael: Looked lively during his cameo role and tried a few shots. Scored the very important second goal which sealed the game. 8/10

Aniekeme Okon: Came on for a tiring Aremu and did his fair share of midfield duties.7/10