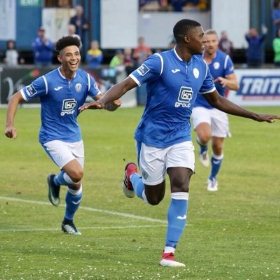 Allnigeriasoccer.com understands that versatile Nigerian midfielder Oluwatunmise Sobowale is on the verge of sealing a deal with English Premier League side Crystal Palace.
The Eagles Academy coaches have been running the rule over the 19-year-old and it's been a good couple of weeks for the youngster.
Having impressed in test games, Sobowale's agent is scheduled to hold talks with Crystal Palace in the next couple of days to discuss a contract.
Although the transfer window closed last week, that does not prevent Palace from handing a deal to the midfielder as he is a free agent.
His younger brother, Oluwatimilehin Sobowale, is available for selection for Manchester City for Premier League games for the remainder of the season as he was registered in their updated Premier League squad as an U21 player.
Oluwatunmise previously spent time playing at League of Ireland Premier Division side Waterford, the U19 side of Hércules CF in Spain as well as Finn Harps, for whom he scored on his debut against Longford Town.
Ifeanyi Emmanuel
Photo Credit : donegalsporthub.com