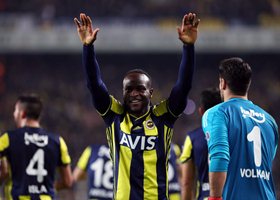 Chelsea loanee Victor Moses has cited ex-Real Madrid and Juventus superstar Zinedine Zidane as his idol.
The Fenerbahce winger was full of praise for the 1998 World Cup-winning midfielder, labeling the Frenchman as one of the greatest players to have played the beautiful game.
Moses was playing for the youth team of Crystal Palace when Zidane called time on his career after representing France at the 2006 World Cup.
In an interview with Fenerbahce TV, Moses was asked to name his football idol and he replied : ''Zidane. He was a great player. His movements in the field were more relaxed and he was confident in playing with the ball.''
Two Nigerian players, including Emmanuel Emenike convinced Moses to join Fenerbahce in the January transfer window and the winger has not regretted his choice so far.
He said : ''To be clear, Super Lig is a big league. I watched videos about the Super League. Everyone is very passionate. They love football in this country.
''Everybody is talking about football players. I actually talked to a few players before coming here. It was very good experience. .
''I even talked to two Nigerian players, like Emmanuel Emenike. They talked positively about the club. The history of the club is excellent and I'm happy to be here. ''
Moses has been registered by Fenerbahce for the knockout rounds of the Europa League and is in line to face Zenit Saint Petersburg next Tuesday.
Igho Kingsley
Photo Credit : fenerbahce.org