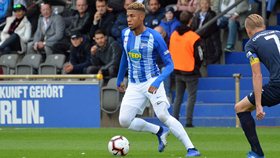 Berlin-born central midfielder of Nigerian descent, Sidney Friede is having a promising start to his career at Belgian First Division A club Royal Excel Mouscron.
The 20-year-old was snapped up by Royal Excel Mouscron on loan from German Bundesliga club Hertha BSC on January 17 and he has forced his way into the starting line-up so quickly.
Friede has started and gone the distance in the last three matches contested by Royal Excel Mouscron in the Belgian topflight, scoring two goals, most recently in the 2-1 win at Gent on Sunday.
If he continues his fine form, there could be a three way tug of war for his services as he is eligible to represent the senior national teams of Germany, Nigeria and the United States.
Having said that, the German Football Association are currently in the driving seat as he has earned 14 caps in total for their U18, U19 and U20 teams.

Friede became provisionally cap-tied to the Germans after making his competitive debut for the U19s in a UEFA EURO U19 Championship Qualifier against Cyprus on March 23, 2017.
The statistics show Friede can score goals as well as assist despite being a central midfielder, having contributed to 47 goals in 123 appearances for Hertha Berlin's youth teams in the last six years.
Ifeanyi Emmanuel
Photo Credit : herthabsc.com
Latest News