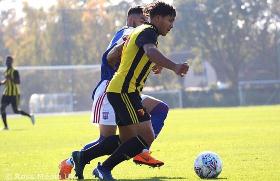 'Nigerian Eden Hazard' Jayden Bennetts was the star of the show as Watford sealed their place in the quarterfinals of the FA Youth Cup following their 4-1 rout of Ipswich Town on Tuesday evening.
Watford confirmed during the game staged at Wingate & Finchley FC that Tottenham Hotspur scout David Pleat was in the crowd for the FA Youth Cup tie, and must have taken down plenty of notes after an all-action first half.
Bennetts and Nigerian-born midfielder Emmanuel Adebiyi were named in the starting line-up and both went the distance for the Hornets.
The Nigeria U20 invitee broke the deadlock when he smashed home from 20 yards with his left foot in the fifth minute.
It was 3-0 Watford after 25 minutes, thanks to skipper Ryan Cassidy who converted a spot kick after Bennetts was brought down in the box by Scott, before Hughes reduced the deficit on 34 minutes.
Twenty minutes into the second half, the Flying Eagles hopeful effectively ended the game as a contest when he scored his second goal of the game.
Jayden's elder brother, Keanan Bennetts, was on the books of Tottenham Hotspur before switching to German outfit Borussia Moenchengladbach last summer.
Ifeanyi Emmanuel