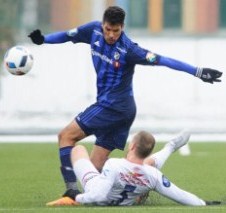 Oslo-born Nigerian striker Ohi Omoijuanfo is on Molde's shortlist as they seek a replacement for Daniel Chima who has flown to China for contract talks with Chinese League One club Heilongjiang Lava Spring FC, allnigeriasoccer.com understands.
Representatives of Omoijuanfo are in talks with Molde and an agreement could be reached before the end of this week.
The former Manchester City trialist was among the best players in the Norwegian Eliteserien in 2017, which led to Lars Lagerback handing him his senior debut as Norway were held to a 1-1 draw by Sweden in an international friendly.
The 25-year-old Omoijuanfo has spent the whole of his career with Norwegian clubs, first representing the youth team of Holmlia before spells at Lillestrom and Jerv.
If talks are fruitful, Chima is expected to join Heilongjiang Lava Spring on a season-long loan.
Omoijuanfo is contracted to Stabaek, whom he joined in 2016, until the end of the 2020 campaign.
Ifeanyi Emmanuel