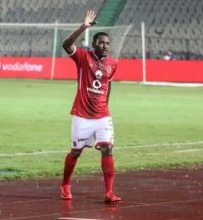 Through a statement on their official website, Egyptian Premier League side Al Ahly have confirmed that Nigerian striker Junior Ajayi has penned a new deal with the club.
If the two parties honour the agreement, the 23-year-old will remain on the books of Al Ahly for the next three years.
Abdul Hafiz, Al Ahly's director of football, said the player had a desire to extend his contract, which is in line with his desire to stay in the club for the next period.
Al Ahly have faith in the abilities of Ajayi as they have offered him fresh terms despite the fact he missed the first half of the season due to a dislocation of the patella.
The 23-year-old was signed from Club Sportif Sfaxien in 2016 and has tallied 24 goals in 81 matches with 19 assists to his name.
The one-cap Nigeria international turned out for Shooting Stars before moving to North Africa.
Igho Kingsley