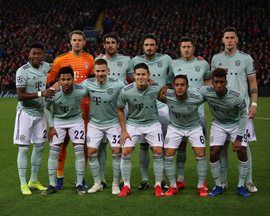 Speaking as a co-analyst on Supersports alongside ex Chelsea and Manchester United stars, Andy Townsend and Dwight Yorke as well as host Robert Marawa, Yobo who made four Europa League appearances during his time with Everton opined that the youngster, Kimmich was defensively astute and was more the reason why the attacking potency of Sadio Mane and Co. was greatly nullified.
"You have to applaud the defensive brilliance of Kimmich all through this game.

"Look how well he's done there, he doesn't come out too close to Mane, he doesn't sit back. He's always got his eyes on the ball.

"That was important in keeping the defensive shape for Bayern. I think they have a very good result to take back home.


Kimmich who logged the full ninety at Anfield was arguably one of his team's best players, showing an impressive defensive nous which helped in seeing out the draw and boosting his side's chances ahead of the return leg.
Emmanuel Chinaza
Photo Credit : fcbayern.de