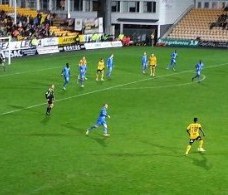 Innocent Bonke is not in contention to play for Malmo when they tackle Chelsea in the Europa League round of 32 second leg on Thursday evening.
Fotbollskanalen.se is reporting that the Nigerian midfielder was not in the traveling party to the English capital, effectively ruling him out of the contest.
Thus, no player of Nigerian descent will be on parade at Stamford Bridge as Chelsea youth-teamers Tariq Uwakwe, Faustino Anjorin and Ike Ugbo have not been added to the roster while Victor Moses and Tammy Abraham are not in the current player list.
Bonke was also missing from Malmo's match day eighteen six days ago when they lost 2-1 to The Blues.
The central midfielder has made just two appearances as a substitute from a possible seven in this season's Europa League, logging 25 minutes.
He joined Malmo in August 2017 from Norwegian side Lillestrom.
Ifeanyi Emmanuel