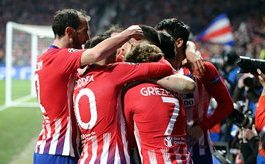 One of the night's controversial moments at the Wanda Metropolitano was thrown up in the second half when Chelsea loanee, Alvaro Morata rose highest behind Giorgio Chiellini to nod in what initially looked to be the opener only for the VAR technology to rule out the goal, having adjudged Morata to have pushed his rival.

And the former Nigeria international who teamed up yet again with familiar faces Dwight Yorke and Andy Townsend believes the VAR call was right in that case though it might have little to do with Morata's brilliant header.

"The magnitude of the push looks irrelevant in this case but I think he [Morata] had his hands a bit on Chiellini's shoulders even if the referee had missed it, the VAR had got it spot on. That's a foul, obviously you could see it right there."

He further opined that a call for the VAR in Jose Gimenez's goal to open the scoring following a goal-mouth scramble would have been incessant and unnecessary.

"Perhaps, we are over using the VAR. Sometimes in occasions like that, the centre referee could easily make a decision without calling for the technology", he said.


Two second half goals each from Gimenez and Diego Godin were enough for Diego Simeone's team to come away victorious from the encounter.
Emmanuel Chinaza
Photo Credit : atleticodemadrid.com