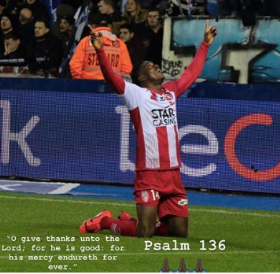 Former Nigeria U23 international Taiwo Awoniyi made it five goals in six matches in the Belgian First Division A after netting the winner for Royal Excel Mouscron as they claimed a 1-0 victory against Sporting Lokeren on Saturday evening.

The Liverpool loanee benefited after the Lokeren defense failed to clear the ball from danger following a corner kick in the 52nd minute.

Awoniyi had missed a chance to open the scoring just before half-time after a lovely pass from Manuel Benson and could have doubled the advantage in the 82nd minute but his shot went over the bar.

Two minutes later, the number fourteen made way for Haitian attacker Frantzdy Pierrot, and there's a possibility he was replaced to avoid a red card as he was shown yellow in the 21st minute.

Only Victor Osimhen's Sporting Charleroi have stopped Awoniyi from scoring since his return to Royal Excel Mouscron in the January transfer window but he still had an impact in the game.


Thanks to their sixth successive win in the Belgian top division, Royal Excel Mouscron have climbed to tenth on the table with 35 points from 27 matches in the regular season.
Ifeanyi Emmanuel
Latest News