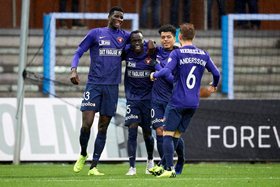 FC Midtjylland and FC Copenhagen are neck and neck in the race for the Danish Super Liga title after the defending champions beat AGF 2-1 at  Ceres Park (Arhus) on Sunday evening despite playing with two men less for a portion of the second half.
Jakob Ankersen's 32nd minute opener was cancelled out by Onuachu seven minutes before half-time.
And the former Dream Team VI invitee netted what proved to be the winning goal in the 53rd minute, taking his tally in all competitions to seventeen goals in the process.
Onuachu's excellent disciplinary record of never picking up a red card since he made his professional debut against Randers in November 2012 ended today after he took the walk of shame in the 67th minute.
The lanky striker was first shown a yellow card in the 46th minute and picked up his second booking 21 minutes later which ultimately led to his dismissal.
Onuachu played 182 matches as a professional before he was given the matching orders by referee Jorgen Burchardt.
Ifeanyi Emmanuel
Photo Credit : fcm.dk
Latest News