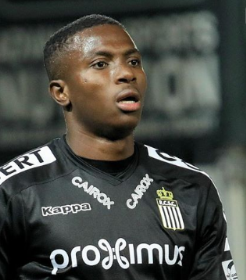 Round-up of the Nigerian players that got on the score-sheet in league matches across Europe on Sunday, February 24.
Victor Osimhen has reached the double-digit mark for goals in the league for the first time in his young career after finding the net, his tenth of the season, as Sporting Charleroi suffered a 3-1 loss at the hands of St.Truiden in a Belgian First Division A tie at Stayen (Sint-Truiden).
The home team established a two-goal lead after 31 minutes before the Nigeria international halved the deficit eight minutes before half-time.
Osimhen fired past the goalkeeper after a fine cross from Ali Gholizadeh and came close to grabbing an equaliser when his effort was saved by Kenny Steppe on 42 minutes.
Elsewhere, new signing Iyayi Atiemwen opened his goalscoring account for Dinamo Zagreb as they claimed a 3-0 win against NK Osijek at Stadion Maksimir.
The former Nigeria U23 international, who was making his fourth appearance in all competitions for his new employer, extended Dinamo Zagreb's lead to 2 - 0 in the 21st minute.
Ifeanyi Emmanuel
Photo Credit : rcsc.be
Latest News