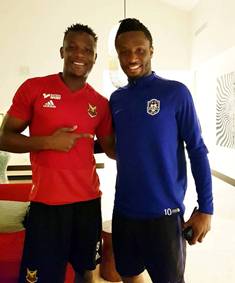 Former Nigeria U20 international Alhaji Gero has ended speculation about his future by penning a deal with Swedish Allsvenskan side Ostersunds FK.
The striker was a key member of the Ostersunds FK squad that reached the round of 32 of the Europa League in the 2017-18 campaign before they were knocked out by Arsenal.
Alhaji Gero is returning to the Allsvenskan after playing a few months at Iranian team Esteghlal, for whom he made seven appearances before breaking his contract.
In his first words after penning the deal, Gero told OFK's official website : ''OFK has always meant a lot to me because this is the club where I developed myself and my game and have made myself the player I am today.
''Many players have left the club last year. The players who are now in the club have done everything possible to continue to perform and have done well.
''Now I look forward to meeting my teammates and the leaders around the team. And of course the fans never give up''.
Gero, who will have his first training session on Tuesday, lists El-Kanemi Warriors, Lobi Stars, Kaduna United, Enugu Rangers, Osters IF and Viborg FF among his previous clubs.
Igho Kingsley