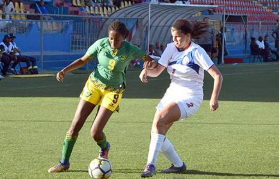 The Jamaica Football Federation (JFF) are in pole position for the services of highly-rated striker Olufolasade Adamolekun ahead of the 2019 FIFA Women's World Cup.
Adamolekun was born in Austin, Texas to a Jamaican mother and a Nigerian father which makes her eligible to represent United States, Jamaica and Nigeria at international level.
She played for United States youth teams before switching allegiance to Jamaica, whom she represented at last year's
CONCACAF Under-20 Women’s Championship.
Regarded as one of the rising stars of Jamaican female football, the United Soccer Alliance attacker was quickly integrated into the senior team.
The 18-year-old was handed her senior debut on Thursday, February 28, replacing Laura Jackson at half-time as the Reggae Girlz beat Chile 1-0 in a pre-World Cup friendly held at the Kingston National Stadium.
Jamaica are set to make their maiden appearance at the Women's World Cup this summer and have been pitted against Australia, Brazil and Italy in the group stage.
Adamolekun will become cap-tied to the Caribbean island nation if she features in the tournament holding in France.
Her brother, Nathaniel Adamolekun has pledged his international future to Jamaica and is currently on the books of Portuguese setup Feirense.
Ifeanyi Emmanuel
Photo Credit : jamaicaobserver.com