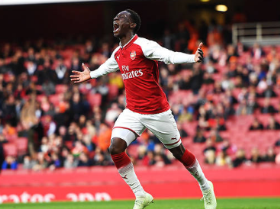 Arsenal striker Folarin Balogun delivered a masterclass for the club's U-18s, scoring a treble while also laying on one of the goals as they beat Norwich City 6-2 at the Shenley Training Centre on Saturday afternoon.
The 17-year-old who is the leading goal poacher in the southern section so far was handed a start by youth coach Ken Gillard alongside Arthur Okonkwo who played in goal for the hosts.
Ryan Alebiosu who started the day on the bench was given a run out after 62 minutes when he replaced his compatriot.

Balogun opened the floodgates as early as the third minute before adding another two in the space of 35 minutes to put the team out of sight.

The youngster was equally on hand to tee up Trae Coyle ten minutes after the restart for the fifth goal to compound the woes of their opponent and mark a brilliant offensive display for himself.

The hat trick thus took his tally to 16 goals in just 13 league games for the U-18s this season.


Aston Villa, Chelsea, West Ham, Reading, Tottenham, Fulham, Leicester City and Southampton are the other teams he has scored against in the U-18 Premier League this season.
Emmanuel Chinaza
Photo Credit : arsenal.com