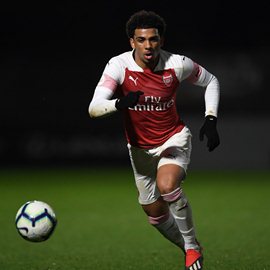 Bayern Munich are interested in signing Arsenal youngster with Nigerian blood Xavier Amaechi.
This is according to London based website, Football.London who claim the England youth international has become the new target of the German Bundesliga champions after their efforts to sign Chelsea's Hudson Odoi became unsuccessful.

The 18-year-old has scored three goals in the Premier League 2 and was in action Monday evening when the Arsenal U-23 side  drew 2-2 with Swansea at Meadow Park which also paraded Bukayo Saka and Folarin Balogun, the latter getting on the scoresheet.

The winger signed his first professional contract in January 2018 and is contracted to the Gunners until the summer of 2022.