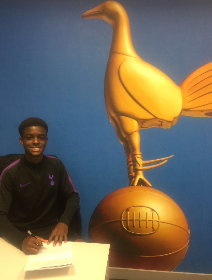 Allnigeriasoccer.com can exclusively report that Premier League side Tottenham Hotspur have bolstered their youth ranks with the signing of Nigerian starlet Ferdinand Okoh.
A central midfielder by trade, Okoh has penned a deal until U16 level when Tottenham will have to make a decision on their new scholarship intake.
The 15-year-old has moved on to pastures new a year after he was released by another London club, West Ham.
He has made remarkable progress over the last one year after working with established coaches to further improve his qualities and has become a better player.
Okoh has been described by his minders as a central midfielder with good range of passing and has the ability to break up play.
Spurs are believed to be mulling over a move for Derby-born Nigerian striker Kion Etete after he trained with the club last week and played for their U18s in the league.
Luke Amos, Timothy Eyoma, Jubril Okedina and Joshua Oluwayemi who have Nigerian blood flowing in their veins play for Tottenham's youth teams.
Ifeanyi Emmanuel