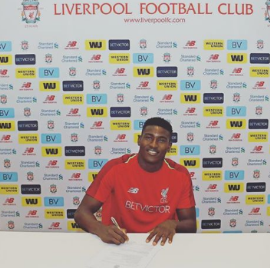 Taiwo Awoniyi did not enjoy his time with Gent and had to be recalled by Liverpool in the January transfer window before he was loaned to another Belgian First Division A team Royal Excel Mouscron for the remainder of the season.

The striker is enjoying a purple patch since returning to Mouscron, scoring 6 goals in 7 games, which led to speculation in the media that he could earn his maiden call-up to the Super Eagles which didn't happen.

Explaining why he struggled to find his feet at Gent, Awoniyi stated that he was not granted enough minutes to show his qualities.

''Ghent is a beautiful place, with a beautiful club, but maybe I was at the right place at the wrong time, first of all, you have to watch the team when I  came in,'' Awoniyi told Sport/Foot Magazine Belgium.

''There were a lot of new players, we also had to analyze the situation of the club: we did not win matches, one coach was fired, another replaced him, with a new philosophy, a new style, of which I was not really part of it, I went in sometimes 5, 10 or 20 minutes.

''It's true that I could have made the difference, I did not do it, but what I mean is is that the club as a whole was not in the best of situations.

''I did everything to succeed in Ghent, I can get up and tell whoever I want, I must also be honest with myself, did my best but did not succeed.''

Gent were forced to pay Liverpool a financial penalty after failing to start Taiwo Awoniyi in at least seventy percent of their first-team matches.