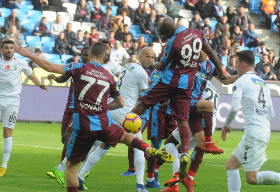 Nigeria striker, Anthony Nwakaeme has been on a rich vein of form for Trabzonspor lately and he continued with another crucial goal as they beat Akhisarspor 2-1 at the Medical Park Stadyumu on Saturday afternoon.

The 29-year-old sparked the comeback victory for his team when he converted a left footed shot from very close range in the 70th minute following a corner situation to pull his team level after they had fallen behind to a Jeremy Bokila's opener, paving the way for his teammate Jose Sósa to net the winner 14 minutes from time.

The goal was his fourth in his last three games which had seen him score in each of those games, bagging a brace against Kasimpasa on match week 24 in the topflight while also getting on the score sheet versus ümraniyespor in a Cup game a week before.

The goal took his tally in the Turkish Super Lig to seven in just 18 league appearances since joining the club from Hapoel Be'er Sheva last year while he has also struck once in four Cup games too.

Meanwhile, crocked midfielder Ogenyi Onazi is still on the sidelines and has played no part in each of Trabzonspor's last twelve competitive games this year.


Trabzonspor are placed fourth on the Super Lig standings with 40 points after 25 games so far.
Emmanuel Chinaza
Photo Credit : trabzonspor.org.tr