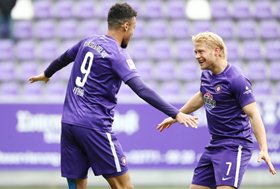 Germany youth international of Nigerian descent Emmanuel Iyoha broke his eight-game goal drought while also providing his team's second of the day to condemn Jamilu Collins' Paderborn 07 to defeat as Erzgebirge Aue picked up a 2-1 win in the German 2. Bundesliga.

Prior to scoring at the Erzgebirgsstadion yesterday, the striker had failed to find the net since scoring in a 5-0 win over Greuther Furth in December 2018.

With just eleven minutes played, Iyoha curled home the opener from the left side of the six yard box to the high centre of the goal after profiting from a pass from Pascal Testroet and then laid on the second for Phillip Zulechner.

The young attacker, who has also represented VFL Osnabruck, is on a season-long loan deal from topflight club, Fortuna Dusseldorf who have Nigerian goalkeeper, Maduka Okoye in their ranks.

Standing at 1.91 meters, he is well known for his aerial abilities and an impressive technique on the ball and Veilchen coach, Daniel Meyer who is already aware of his qualities has tipped him to hit new heights in his development.

Born in Germany 21 years ago, Iyoha represented the European nation in the Fifa U20 World Cup competition in the 2017 edition held in South Korea.

Super Eagles full-back Collins, meanwhile was in action for the entirety of the clash for Paderborn 07.
Emmanuel Chinaza
Photo Credit : fc-erzgebirge.de