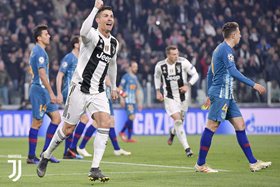 Juventus played host to Atletico Madrid in the return leg of Champions League's round-16 tie on Tuesday night, knowing that not less than three goals without conceding will see them through to the next round of the competition.

Luckily, the Bianconeri have a big-game changer in person of Cristiano Ronaldo, who was all over the pitch throughout the encounter.

The former Manchester United and Real Madrid world-class striker found the back of the net in the 27th minute to give the home side a glimpse of hope, made it 2-0 two minutes after the restart, then completed his hat-trick from the spot on 86 minutes.

Ronaldo's match-winning display hasn't gone unnoticed by Nigerians, who took to their respective Twitter handles to shower praise on the Portuguese legend.

Here are some of their tweets :

Husnainbhatti @Husnain666 praised Ronaldo for his legendary showing as he tweets:  "Legend does it again @ Cristiano @juventusfcen #Hattrick"

Man United @UnitedDele chose Ronaldo over Messi as he tweets : "Who pissed this guy off? Did someone say Messi was better than Ronaldo ?"


Brian Sylvester @BrianSy04345620 had a short and precise tweet for the man of the moment, he wrote : "Ronaldo the saviour #wonderman #king" on his Twitter account.
@Iam_Abdolaxis : ''Cristiano Ronaldo scoring 3 goals after a first leg 2 goals deficit to put his team in the next round. The other guy would’ve bottled this chance, cried and announced retirement with immediate effect. The difference between GOAT and Eran Iya Oshogbo.''

@Iam_Abdolaxis : ''RT if you believe Ronaldo is the greatest player to ever play the game.''

@Christi09199704 : ''I see no reason anyone should compare Messi to Ronaldo Bcus Ronaldo is far better Dan Messi''.

@valralph123 : ''If Ronaldo didn't give up after a 2-nil loss... Why should you? Ronaldo = GOAT''.
Ibukun Italoye
Photo Credit : juventus.com