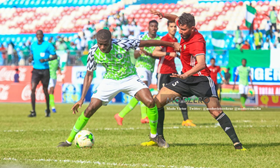 The Dream Team are through to the next round of the U23 Africa Cup of Nations qualifiers following an exhilarating comeback victory in Asaba on Monday.
Allnigeriasoccer.com's Emmanuel Chinaza runs the rule on the players on show thus :
The Starters
Goalkeeper

Francis Uzoho: Had very little to do as the Libyans sat back. (7/10)

Etiboy Akpan: Supplied the balls up-field when needed and largely looked untroubled with the retreating Libyans. (7/10)

Valentine Ozornwafor: The youngster looked very much at home and was composed alongside Awaziem. A debut to remember. (7/10)

Chidozie Awaziem: Marshaled the rear with grace and did substantially well in keeping out any long balls. (7.5/10)

Ebube Duru: Didn't put a foot wrong in his defensive duties and will relish easier encounters like this one. (7/10)

Kelechi Nwakali: The Arsenal loanne really proved a handful playing through the middle. Sniffed out and tried to make the best of every opportunity he was afforded.

Saw a decent set piece come off the upright before playing in Osimhen for his hat trick. (8.5/10)

Azubuike Okechukwu: Dropped deeper to safe guard the back line and stop any foray the Libya might manage to make at goal. A good one from the team's skipper. (7.5/10)

Victor Osimhen: Man like Osimhen. Took great joy in punishing the errors of the Libyan backline, first dispatching the opener after they failed to clear their lines before adding another two in predatory fashion. Sensational. (10/10)

Taiwo Awoniyi: The Liverpool-owned striker saw very little of the ball yet and looked stifled upfront. A few quick darts into the opposition but nothing spectacular. Unsurprisingly came off for Okereke. (6/10)

Samuel Chukwueze: A thorn in the flesh for the North African nation particularly in the first half.

Hit the woodwork with a brilliant free kick and was always looking to dart in behind opposing defenders. (7.5/10)

David Okereke: Came on for Awoniyi and wasted little time joining the party.

Kept a cool head to guide home the fourth goal of the day. A brilliant cameo. (7/10)