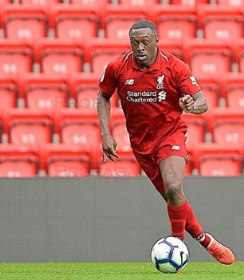 Ibadan-born winger Bobby Adekanye has announced he will leave Premier League giants Liverpool at the end of the 2018-19 season when his contract expires.
Although Serie A side Lazio have been mentioned as a possible transfer destination for Adekanye, the former Ajax Amsterdam and PSV wonderkid has refused to rule out a return to the Netherlands.
A product of the youth team of Barcelona, he explained that he rejected penning a three-year contract extension with the Anfield side after he was left out of the first team's pre-season tour of the United States.
''But that didn't happen in the end. That is disappointing and it has contributed to the fact that I do not want to renew my contract,'' Adekanye told Voetbalzone.
''If they promise such things and it doesn't happen, I don't know what will happen if I sign for three years.
''That confidence is no longer there, even though I still greatly respect the club.''
He continued : ''They don't just extend for three years, so maybe there was a schedule behind it. But I no longer have faith in that.
''In terms of money, things are fine, but you have nothing if there is no perspective behind it. Money will come later, I now need playing minutes.''
Adekanye, 20, made his international debut for Netherlands U20 national team against Mexico on March 22, going the distance in a 3-2 win.
Ifeanyi Emmanuel