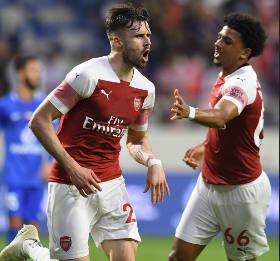 Two Nigerian teenagers made their first-team debuts for Arsenal in a 3-2 win over Al-Nasr in a friendly at the newly built Al-Maktoum Stadium, Dubai on Tuesday afternoon.

Three players of Nigerian descent had earlier traveled with the club to Dubai but while dazzling winger, Amaechi was named in the starting line-up, midfielder James Olayinka came on in the second period.

Goalkeeper Arthur Okonkwo will have to wait much longer for action with the club's first team too as he was not included in the match day squad here.

Unai Emery opted to unleash the youngster from the off in an attacking trident alongside Mesut Ozil and Alexandre Lacazette in a strong offensive move.

Donning the No. 66 shirt, Amaechi was in action for 45 minutes before the manager opted to withdraw him for Pleguezuelo while his compatriot Olayinya (No. 75) replaced Charlie Gilmour in the 67th minute.


Carl Jenkinson, Lacazette and Tyreece John-Jules got the goals for the North London club while the United Arab Emirates side were rewarded for their efforts through Ronnie Fernandez and Khalid Jalal.
Emmanuel Chinaza
Photo Credit : arsenal.com