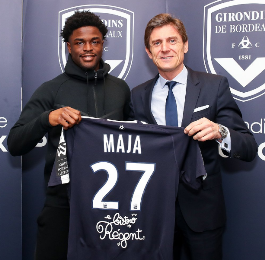 Josh Maja, 20, was in the most prolific form of his career with Sunderland during the first half of this season as he constantly found the back of the net in the EFL League One.
His goalscoring form caught Mauricio Pochettino's eye and the Tottenham manager reportedly made a move for his signature in January transfer market.
According to a report that emanated via Express in January, the Argentine manager was more than willing to lure the striker to North London.
Surprisingly, the former Super Eagles trainee snubbed a move to Tottenham and went on to seal a move to French Ligue 1 side Bordeaux before the January transfer window closed for business.

Two months after signing a four-and-half-year contract, Maja hasn't hit the ground running and it's looking he made a wrong decision by joining Paulo Sousa's side.

Maja, who already scored 15 goals before leaving the Stadium of Light for an undisclosed fee, is yet to open his goalscoring account for Bordeaux.

Regular game-time isn't guaranteed for the youngster. He has featured in just five Ligue 1 matches and his future with the team doesn't look bright.

Though joining Tottenham doesn't guarantee a permanent spot in Pochettino's team either, but Maja will surely have the opportunity to learn many attacking skills from one of the world's deadliest strikers Harry Kane.


As much as it is too early to criticize Maja's switch to Bordeaux, it won't be out of place to say that the youngster has made a huge decision that will surely have a massive impact on his career in the nearest future.
Ibukun Italoye
Photo Credit : girondins.com